Firstly, I want to say thank-you to Walker Books Australia, for sending me a review copy, in exchange for an honest review. I truly appreciate the opportunity!

As always, here is your disclaimer that this review may contain spoilers, If you haven’t read this book, I highly recommend avoiding the spoilers by reading my spoiler-free review on GoodReads HERE. 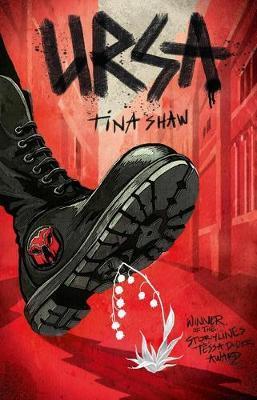 This book is slow to start, I’m about 60 pages in and finding the language to be quite stiff and the pacing, on the slow side. That being said, I am interested to see what happens and where the story Is heading. It does feel familiar, typical dystopian, ‘us’ being ruled by ‘them’, but I’m sensing a twist may be starting to take place.

I feel like we need to know more about Leho’s mum. That would be an interesting story! Why is she so hates? Why are the people she talks to suddenly assaulted brutally in the street? What did she plan that was so bad, she got blinded then locked herself away? I need answers!

Woah, hang on, on top of being starving, living in ghettos and treated as a lesser people (hello Holocaust connotations), there is also a rape. I was not prepared for there to be rape and quite frankly it doesn’t really fit with the story. I understand it is there to show the brutality of the Travestors, to show how the Cerels are the lesser people and that they can be treated as though they aren’t people. But I also feel it was pointless in this case. I don’t think it needed to be Leho’s sister, it could have been a rumour, heard by the kids, not someone so close to Leho, unless there is a plot line for it. I just hope it wasn’t rape, for the sake of rape, it didn’t really have a big ‘wow’ or shock-factor, so I am interested to see where this line goes.

I have under 100 pages left and still, very little has happened. This is going to be one of those books, where everything happens in the last 50 pages, and although I am looking forward to the action finally happening, I am also tired of nothing happening.

I think it was way too easy for Leho to get a job, working in the directors’ garden. Firstly, he lied to get the job, there were no checks, people just accepted that he was there and who he said he was. It felt too easy, too convenient.

I am slowly losing patience with this book. I am eagre to lean what Leho will do, how far he will go to impress his brother, or will he choose to try to save his family. I just hope, whatever he does, he does it soon.

I think I have just hit the turning point. Emee’s world is starting to turn. Of course, the Travestors had no idea that Cerel men were being forced against their will, into work camps. I wonder what Emee does with this new information, or if she will ignore it.

It is hard not to compare this book to the Holocaust. The Cerels are the ‘lesser’ peoples, forced to live in ghettos, not having access to enough food, or any health care. They are excluded from entering certain shops, with signs plastered to walls telling them where they can and can’t shop. The Black Masks, showing such random brutality towards any Cerel on the street and the most similar is the removal of all men and their placement into work camps. I’m not sure if it was the intent of the author for the similarities, but I can’t un-notice them.

Okay, allow me to get back on the Marina and her rape, rant train. As I mentioned above, I completely understand the reason that Shaw wrote in a rape, the brutality of the Black Masks, had to be shown to be completely brutal and horrific, but there was no real plot for this horror. As it happened to a pretty significant character, I expected there to be something more. We know that Cerels are banned from having children, which leads to Marina having to leave to hide her pregnancy, but that is all we got, following up the horror. I am crabby about the use of rape when it didn’t add to the story line and it didn’t have any follow ups. I think it could have been hinted at in different ways.

The book finishes on a revolution and a funeral, yet nothing is truly resolved, and I don’t think there is another book coming. It all feels rather pointless.  Leho’s character felt very naïve, I realise that he is quite young, but he has to live through such horrors and to literally fight to put food on the table. But he throws good things away to impress his brother, not because he, himself wants change.

This was a 3-star read for me. It had its moments of wonderful writing and snippets of information that really lifted the plot, but I just think that there were too many things missing for it to be truly enjoyable. I think we needed more back story, more information on the Government and on Leho’s parents. If there had been more information provided, instead of following Leho around the countryside (for most of the book), I think it would have taken this book to another level. A good read, just something was missing for me.

If you are still here, thanks’ for sticking around!

Have you read Ursa? What did you think?